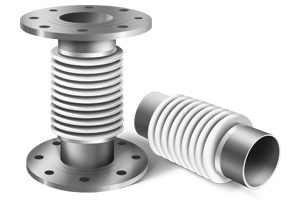 The application of bellows is determined by the need to avoid, stabilize or minimize the occurrence of undesirable factors resulting from environmental exposure or the service conducted and as a result of the device operation. These factors may include stress in metal, pipeline supports, etc.

The main sites of application of expansion bellows are systems with liquid and vapor service operating at high pressures and high temperatures. They are widely used in power generation, chemical, petrochemical, oil, gas and other industries.

The main element of the expansion joint is the bellow. The bellow is an elastic asymmetric corrugated metal cover made of several layers of stainless metal sheet by method of hydraulic sheet rolling or with the help of a special press.

The design of the bellow allows the expansion joint under the influence of the longitudinal, lateral and angular momentum to stretch, shrink, deform in the transverse direction and to bend with considerable displacements (up to tens of centimeters and degrees), retaining tightness.

The main types of expansion bellows are: